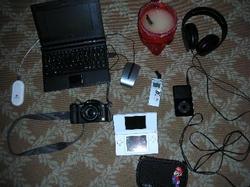 Consumer electronics companies are almost (I said almost) ashamed of using the word convergence now. It’s become a byword for clunky, poorly-designed attempts to shoehorn as many gadgets as possible into one device, while satisfying nobody.

Yet the basic idea behind convergence – the idea of cutting down the number of gadgets you carry around by combining their functions – isn’t dead. In fact, it’s a necessity. Last week I went to CES with a mobile phone, a laptop, a digital camera, a dictaphone, an iPod, a Nintendo DS, a Skype headset, and a USB memory stick. Oh, and a wristwatch.

Isn’t it time I started throwing out some of those gadgets, with some necessary convergence? It sparked the idea for this piece, where one-by-one, I’m going to see if I really need all those different bits of consumer technology.

Can I throw out my mobile phone?

No. Don’t be silly. If any gadgets are to be thrown out here, they’re probably going to have to be absorbed into the mobile…

Can I throw out my wristwatch?

This one’s easy though. The humble watch’s days are numbered, given that any mobile phone idle-screen worth its salt shows the time, as do laptops and iPods. Even the efforts of some companies to turn watches into mobile phones can’t save it: the watch goes.

Can I throw out my digital camera?

A tougher one here. It’s true that the current crop of mobiles offer five-megapixel cameras, which for many people is converged enough for them to lose the standalone digital camera. Yet for anything more than casual snaps, we’re not there yet. It’s partly down to battery life – try using a Nokia N95 for more than a few snaps to see that – and partly due to quality.

Phones are still catching up when it comes to optical zoom, shooting modes, and overall photo quality. My trusty Panasonic DMC-FZ7 stays – although thankfully, when I don’t have it with me, my N81 is a decent substitute for snapshots. It’s worth noting here that I have seen bloggers at mobile trade-shows using their handsets as cameras – so some people are ahead of me on this count.

Can I throw out my dictaphone?

I bloody love my Olympus dictaphone: it records stuff as MP3s and then turns into a USB stick to transfer them to a laptop for playback and transcribing. But I’m being a bit lazy – more than one person has pointed out that my mobile is more than capable of acting as a journalist-grade dictaphone. Meanwhile, there are several iPod add-ons to convert that device into a voice recorder too. If I can get my arse into gear, the dictaphone goes.

Can I throw out my iPod?

The convergence between mobile phones and iPods is one of the most hyped in recent years, yet how justified the hype is depends on your music usage. If you’re a casual listener, who only owns a few dozen albums, then you don’t need an iPod any more – your phone will do everything you need.

However, if you’re like me, and have way too much music that – despite not having listened to 95% of it in months – you want with you all the time… well, you’ve got to hang onto that iPod for the moment. The largest internal memory size for a mobile phone at the time of writing is 8GB, although you can complement that with a similar-sized SD card.

But until mobile phones offer 40GB-plus of storage space for tunes, I’m afraid the iPod stays. Realistically, it’s only a matter of time though.

Can I throw out my laptop?

It’s another ‘no’ on this one. If all you want to do is email and surf the odd web page, you can probably lose the notebook. But if you do anything more, even keyboard-toting smartphones simply can’t compete – especially after, ooh, 10 minutes’ use. And despite the increasingly small UMPCs, it’s hard to see them reaching the size where you’d junk your mobile phone for them. The laptop stays.

Can I throw out my Skype headset?

I reckon I can, but I’m not sure how. Surely my Bluetooth-equipped phone is capable of acting as a Skype headset, connecting wirelessly to my laptop? There must be an application to do this – and if there isn’t, there should be. Anyone got a recommendation? The sooner I lose the headset, with its cable that gets fearsomely tangled when it sniffs a suitcase, the better. In any case, my laptop has a built-in mic and speakers, so the headset can go now anyway.

Can I throw out my USB memory stick?

Yes. Not least because, if I’m at a trade show, I’ll be given a dozen more with electronic press kits on. But in any case, it’s easy nowadays to use your phone or iPod as portable memory, with a bit of fiddling.

Can I throw out my Nintendo DS?

Mobile games have been hyped for years now, and it’s an area I write about constantly, so I can say that the quality of mobile games has improved rapidly, to the point where on some handsets, the visuals and gameplay surpassed Game Boy Advance long ago, and are more akin to the original PlayStation – or even the PS2 in some examples.

Meanwhile, this year we’re likely to see touch-screen mobile games making more of an impact, on the iPhone and other handsets. In theory, there’s no reason why you won’t be able to play DS-quality games on a phone – and tech firms like Qualcomm have presentations showing how their mobile chipsets will catch up and surpass DS and PSP in the near future.

The problem for this geek? Nintendo don’t make games for mobiles, which means no Zelda, no Animal Crossing, no Mario Kart… The DS stays, but it’s on the grounds of its software, not its hardware.

It seems there’s some way to go on the convergence superhighway if you’re a geek. I’m left with a mobile phone, a laptop, a digital camera, an iPod, and a DS. All I’ve shifted is the dictaphone, the Skype headset and the memory stick. Ah well, that’s half the suitcase devoted to chargers whenever I go abroad still, then…