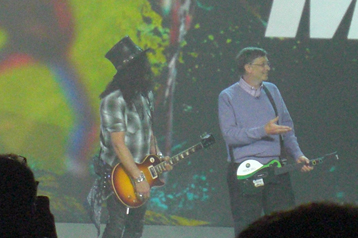 I’m sure had he introduced the cure for cancer, people would still be writing up their show reports with comments claiming he ‘missed the mark’, and his cure is ‘too little, too late’. Sometimes people just love to be controversial, but are any of their criticisms warranted? Let’s take a look…

It’s hard to avoid speculating as to what will be shown off in conferences and keynotes speeches, especially when it’s Microsoft, and Gates normally uses his annual keynotes to debut products like the Surface, Windows Mobile, or the Xbox 360. Most people were expecting an integrated HD DVD drive in the Xbox 360, some Windows Mobile 7, others some more news regarding last year’s Surface.

What everyone was hoping for however, was a comment on the HD DVD/Blu-ray battle, especially since Warner went exclusive with Blu-ray on Friday, causing many to proclaim HD DVD as ‘dead’. We’ll probably never discover whether there was going to be a HD DVD 360, as it may’ve been canned, with the keynotes speech rewritten at the last minute.

What his speech lacked in real news or massive product announcements, it ebbed with celebrities and sparkle – no doubt an instigator for many people’s wrath, hoping for more solid news. It was however, his last CES appearance, as his retirement is slated for mid-July, so going out with a bang was always inevitable.

There were a few solid announcements for the British market however, with news that the Zune will be available worldwide in Spring, and the Xbox 360 offered as a set-top box for the BT Vision service.

Gates mentioned that NBC has chosen Microsoft for their exclusive online partner for video footage at this year’s Beijing Olympics. It may not have been big news, but it’s exciting for those interested in the sports. Not only that, but they’ve partnered with ABC and Disney, to bring their TV shows to Xbox Live later this month. Shows including Lost, Grey’s Anatomy, Desperate Housewives, Hannah Montana and High School Musical should be swinging down the wires to you shortly.

Like with last year, the Ford Sync service featured heavily. Powered by Microsoft software, tracks on your Zune or Windows Mobile can sync to the car, all voice-activated easily. It may be sniffed at, but it is a nice look at future possibilities for all car manufacturers.

I’ll admit, I was dead impressed with last night’s keynotes speech, even if he didn’t make any mammoth announcements. This was Gates’s last CES speech, so it was always going to be about him, and throb with celebrities and entertainment. Anyone who wrote up their disappointment and how they expected more, should cast their minds back to when they were on their feet cheering as Bill pulled out his Guitar Hero peripheral, and introduced Slash to the stage. Technology is well and truly sexy.