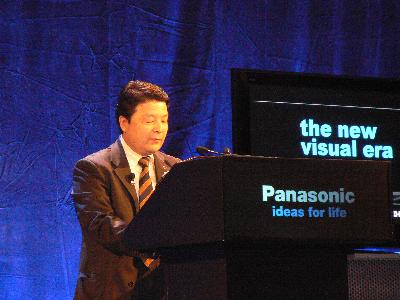 It’s 11am on press conference day at CES, and next up is Panasonic. I’m liveblogging it, although due to sketchy Wi-Fi access, I won’t be publishing the post until afterwards. Just so you know. Judging by the stage backdrop, Viera flat-screen TVs will be one of the core elements today. On with the show…

Chairman of Panny North America Yoshi Yamada is kicking things off, and talking up the company’s official sponsorship of this year’s Olympic Games, which he says will be the first “high-definition Olympics”.

Now he’s showing a promotional video of how HD is changing the daily lives of American families, with the company’s Living In High Definition campaign, which will be expanded to 30 families by March, with movie director Brett Ratner putting their footage together into some kind of project. He should be here to talk it up, but his flight was cancelled apparently.

Also high on the agenda are green issues, with Yamada saying that Panny is teaming up with Sharp and Toshiba for a new joint venture focusing on recycling devices: the Electronic Manufacturing Recycling Management company (EMRM for short). The organisation will also provide recycling services to other companies, including JVC, Hitachi and Sanyo.

“Forming an independent company to manage collective electronics recycling programme is the best way to achieve economies of scale, and create a meaningful and sustainable recycling system,” he says.

Now Panasonic president Shiro Kitajima is taking the stage. Early nuggets: 103 inches is as high as Panny will go this year, TV size-wise (its smallest screen will be 26 inches, but nobody boasts about that).

Connectivity is a focus this year, with a feature called Viera Link. It’s about sticking your camera SD card into your big-screen telly and viewing photos, for example. It’s also about playing back high-definition home videos stored on a 32GB card – Panasonic will be selling one from later this month, targeted at HD camcorder users.

“This function is something consumers are learning to value,” says Kitajima. All Panasonic’s Blu-ray products will also have SD card slots this year, with the company determined to lead in Blu-ray (I wonder if he’ll crow about HD DVD’s problems during his presentation…)

Right, on with the new products, presented by a woman with an enormous toothy smile and a bright orange jumper. I think she may be a TV celebrity, possibly.

Right, there’s a new 46-inch Viera plasma telly, the TH-46PZ850, and then a 37-inch LCD TV, the TC-37LZ800. We’ll have individual stories on these later, obviously. Now the new Blu-ray player, the DMP-BD30, complete with that SD card slot. And she’s talking up that 32GB SDHC memory card – the world’s first of that size apparently. It’ll store up to eight hours of HDTV video, or 5.5 hours of Full-HDTV video. I’m a bit hazy about the difference between those, if I’m honest.

Now, Panasonic has its first integrated home theatre system with integrated Blu-ray, the SC-BT100, complete with a flip-down iPod dock (and a remote control that can operate your iPod too). Nice.

Now the KX-TH1211, flagged as a ‘Link to Cell Phone’. You put your mobile phone in the spot in your home where you have the best reception, and then it transfers your calls via Bluetooth to a separate handset, which you can wander around the house and use. A bit niche, admittedly, but good if reception is dodgy in parts of your house.

Now, Panasonic’s first GPS satnav system, the Strada GP50U. It’s got an SD card slot, can show photos and videos, and compensates for lost signals when you go into tunnels and cities.

Portable DVD players your thing? The DVD-LS86 has a promised battery life of 13 hours – cor! – and an 8.5-inch screen. Onto camcorders, there’s the HDC-SD9, which they say is the world’s smallest Full HD camcorder, coming out in March. Also new is the HDC-HS9, which has an SD card slot and 60GB hard drive inside, also available in March.

More camcorders: the SDR-S7 weighs about six ounces, and has a 10x optical zoom, coming out in May. The SDR-SW20 is a shockproof and waterproof model that can be dunked to up to 1.5 metres. Meanwhile, the VDR-D50 is a DVD camcorder with a 42x optical zoom. Holy moly! That’s a biggun.

Cameras now: the DMC-TZ3, although there’s no details on screen. Digicams aren’t the focus today though, Panny will be announcing abunch of new models at a photographic show later this month. Apparently there are still some other new products that’ll be announced tomorrow at the company’s keynote CES speech.

Right, now COO Joseph Taylor is on stage for some more talking. He’s talking about this Living In High Definition project again, and recapping what previous speakers have said, and plugging that keynote address tomorrow. It sounds like they’re holding some exciting products and partnership announcements back for that.

“We are no longer just your parents’ TV company,” he says. And that’s a wrap.