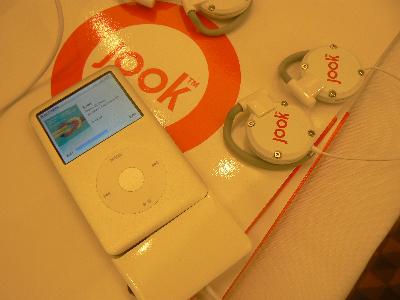 I haven’t been blown away by many things so far at CES this year, but Jook is one of the most intriguing startups at the show. The company’s technology currently takes the form of a gadget that clips onto your iPod (or iPhone, or Zune, or whatever), and lets you broadcast what you’re listening to to people within 30 feet or listen in to their devices.

Suggested uses are friends jogging together and listening to the same music, or simply DJing to the stranger sat opposite you on the train. Meanwhile, there are social networking elements too, since you can download a personal profile onto your Jook device that other people can see – in the example above, if someone tunes into your iPod on the train, they could then look you up on Facebook using your profile info.

Also, you can tag tracks that you listen to, and then see their titles and artists when you get home, using the Jook application.

Jook won’t be a standalone device when it gets into the hands of consumers, though – that device in the pic is just the prototype. Instead, Jook will be a platform, integrated directly into MP3 players, and also accessories like earbuds and headphones.

Jook involves three ‘modes’ when being used. Me Mode switches the connectivity mode off – nobody can listen to your tunes, and you can’t listen to theirs. U mode lets you listen to someone else’s Jook broadcast, while Us Mode makes your current listening available for sharing.

“It should be commercialised by Christmas this year, and we have two customers already signed up,” Jook’s Theo Sanders told me at Digital Experience tonight. “They’re big companies. “I would expect that say I was making some headphones, it would probably add $15-30 to the price.”

Some more technical gubbins: Jook uses a proprietary 2.4 Ghz wireless protocol rather than Wi-Fi or Bluetooth, and each Jook can access up to four channels of audio, sorted by which has the closest and strongest signal. The sound quality is “completely lossless”, and there’s a latency of just 20ms when streaming to another device.

Oh, and the number of people who can listen in to an individual Jook broadcaster is unlimited. It all sounds great: the big question is getting enough Jook-enabled devices into the hands of people to ensure you have a chance of meeting someone who’s got one. Much will depend on who those manufacturer partners are. Sanders mentioned a big giveaway to students to launch Jook too, which will help.

Jook came out of stealth mode today, so rest assured, I’ll be following their progress in the coming months.