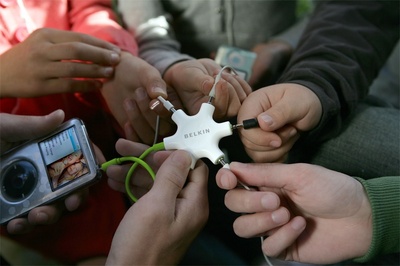 When I first read the release, I thought the Belkin RockStar was a useless idea. However, it’s growing on me. See what you think: it’s a device that you can plug five MP3 players into, and then choose which of them to listen to, or mix songs from several of them.

It’s aimed squarely at teenagers, who apparently do spend a lot of time in the playground listening to each others’ MP3 players. You can mix and fade out tunes between the connected players, using their normal controls.

It could be a novelty that doesn’t sell, or it could take off and be the next big teen craze. 2008 will tell, for the RockStar goes on sale in March in the US, then April in Europe and elsewhere around the world. The US price is $19.99.

CES 2008 Special
Read all our coverage from the show in our CES 2008 category.