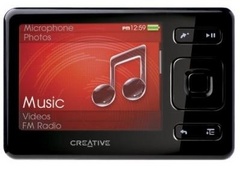 Creative is set to launch a couple more of its Zen players, one of which will sport 32GB of flash memory, making it the largest capacity solid-state digital music player yet available (unless you know different of course).

Sure, the iPod Classic has 160GB, but that’s hard disc based which is so, erm… classic?

Flash players have the potential to be faster, with less reliability problems as there are fewer internal moving parts to crash.

The player will support MP3 and unprotected AAC files, and can be expanded with SDHC cards by up to another 16GB.

Apparently, the 32 gig Zen won’t be available until at least late spring or early summer next year, so it cab’t be used as an expensive stocking filler. However, a 2GB model is available now for £69.