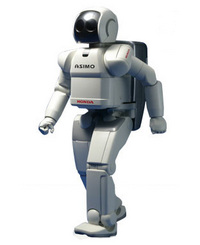 Alas, poor AIBO. He was put to metaphorical sleep just as consumers started to get properly excited about robots. Rumour has it he’ll return in 2008, but until then, Honda’s Asimo is undisputed top dog in the robot world. And he didn’t have to lasergun anyone to achieve it.

Asimo wowed us at CES in January, with his accomplished display of running in circles, going up and down stairs, and booting a football about. By the end of 2007, he’d mastered serving coffee from a tray without dropping it. This, my friends, is progress.

Seriously, Asimo is one of the most powerful arguments yet in favour of the idea that one day, we really will live with robot home helpers in a sci-fi stylee. He might not be available to buy yet, and when he is, you’ll need to be rich. But even so, he deserves a big cyborg clap on the back for cheering us up in 2007.

Check our other 2007 In Review posts by clicking here