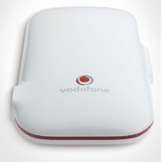 Not the prettiest picture we’ve ever had on an article, but wait until you hear what that boring white box is capable of.

We’re all in agreement that USB modems are nifty inventions, and I’m sure many of us couldn’t live without their roaming internet abilities. Vodafone is touting this new modem as being 22 times faster than standard 3G modems, with 7.2Mbps speeds when plugged into your USB port. Be prepared to cough up for the privilege of downloading episodes of Lost in seconds though, as the unit is £49 or £99 for 18 and 12 month contracts respectively, with the monthly costs starting at £25. Infrequent users can however invoice their workplaces for a whopping £170 and then bill each day’s use of £8.50 thereafter.

Pocket-Lint, who broke the story, is claiming that within the UK the advertised 7.2Mbps speeds are only available in airports and central London for now.