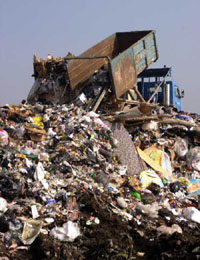 This is news that isn’t really news, as anyone with two broken phones and two broken MP3 players in a drawer, an old MiniDisc player that never really worked in the wardrobe, plus a carrier bag full of abandoned chargers under the stairs will know only too well.

According to an EU report put together by the United Nations University, only a quarter of “medium sized” appliances are recycled once they’ve reached breaking point.

The numbers rise a little bit for the larger items, with 40 percent of fridge-binners calling in the recyclers to take away their knackered bulky white goods, rather than attempt to gradually dismantle them over a period of six months and dispose of them in the normal rubbish piece by piece.

But the real bad news hits tiny portable devices like MP3 players and phones – virtually zero percent of those are recycled when they break or are considered too old to be fashionable. This is because they fit in the bin.

And also because we get so angry when an MP3 player breaks after only six bloody months that binning the stupid thing right there and then is so very satisfying. Especially after you’ve thrown it at a wall and stamped on it.

One thought on “Nobody bothers recycling broken MP3 players”