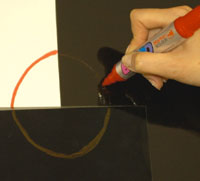 This will come in very handy. You know why. Fingerprints. Not just fingerprints, but little bits of food you spit out occasionally during the course of a mammoth in-bed laptop browsing session. It’s OK, everyone sprays a few droplets of gob on their screens a couple of times a day. There’s nothing wrong with your mouth.

Sailing to the rescue of smudged displays the world over is LG.Phillips, which must be some sort of joint tech-developing venture between the two manufacturing monsters.

The pair’s new cleaner screen system puts fewer coatings on the LCD’s surface, so is cheaper and therefore going to get used by LG.Phillips more. All the anti-glare stuff is necessary so you can use your laptop without having to go and sit in a wardrobe, but it’s that which traps the dirt – requiring an expensive secondary shiny layer to keep dirt off.

What LG.Philips says it’s managed to do is make one layer that’s anti-glare AND dirt-proof. Put simply, you won’t have to wipe so hard to get bits of bread off your screen starting from about 2008. The new system is even resistant to marker pen, as illustrated by the useful image shown above. This all sounds very boring, but if the technology becomes widely available we could see self-cleaning pants by as early as 2012.

One thought on “LG.Phillips develops a "dirt-resistant" LCD screen”