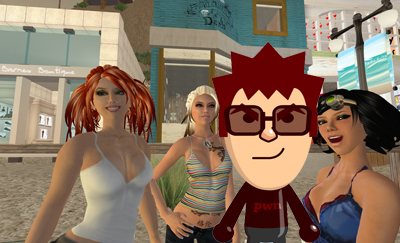 The metaverse is an increasingly crowded place, given the number of startups keen to take a slice of Second Life’s hype and revenues. We’ll be profiling some of the main rivals later this week, as well as taking a look at the hot young guns showing their worlds off at the Virtual Worlds Forum Europe conference.

But what about companies who should be launching their own virtual worlds, but haven’t yet? I’ve had a think, and come up with five firms for whom it’d make sense to go virtual. Starting with…

1. Nintendo. A virtual world from The Big N could easily be seen as a me-too offering to rival Sony’s PlayStation Home. But there are logical reasons for Nintendo to strike its own path too, using its Wii console as the main client. For starters, it’s already got the Miis, which are avatars in search of their own virtual world if ever I saw them. It’s also got the Wiimote controller, which could make navigating such a world a breeze. Nintendo’s gaming heritage would give a ready source of inspiration for the world’s look and feel, and the DS could bring mobility into the equation. Do it, Nintendo!

2. Google. There’ve been strong rumours about Google launching its own virtual world for months now, most recently fuelled by a mysterious beta being carried out with a US university. A Google virtual world would presumably be firmly rooted in the real world – i.e. Google Earth. Presumably search and contextual advertising would also be a major ingredient, although I’d be hoping for some slinky in-world versions of services like Gmail and YouTube too. Watch this space…

3. Apple. Doesn’t Apple have enough on its plate getting to grips with the mobile phone world to go virtual too? Well, maybe. But an Apple virtual world would nevertheless be a wonderful thing. You can bet the user interface would be innovative, and there’d be a clear business case for Apple to make music a focus, thanks to its ties with the record labels through iTunes (a virtual apartment where you can stream your iTunes library to friends? Yes please…).

4. Nokia. The mobile company is repositioning itself as a Web 2.0 friendly services company, so why not launch its own mobile-friendly Second Life-like world? Nokia’s already made tentative steps into the VR arena, with a deal to bring isometric chatworld Habbo Hotel to its new N-Gage platform. But with so many of Nokia’s new ventures focusing around community, it wouldn’t be a huge leap for the company to plough a small fraction of its mammoth research budget into its own avatar-based offering, working across NSeries handsets. And for once, it wouldn’t be competing with the mobile operators…

5. BBC. This is a bit of a cheat, since the Beeb is rumoured to be taking the wrappers off a big virtual world project this week at Virtual Worlds Forum Europe. But in the meantime, let’s look at the logical reasons for the Beeb to be getting into the space at a time when it’s making cuts elsewhere. Launching a safe virtual world aimed at kids would certainly fall under its public service remit, and the BBC has no shortage of brands to pull in. But what about us adults: who could resist a Beeb multiverse letting you wander around Doctor Who sets, the Match Of The Day studio, or skipping through a virtual Sherwood Forest? Meanwhile, the BBC’s radio department has plenty of experience running events in Second Life that could be put to use in its own world.

What do you think? Let us know which companies you’d like to see launch a virtual world, or whether you think I’m talking rubbish / genius with the five I’ve picked.