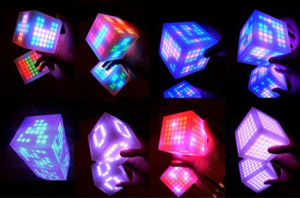 And you thought the new Rubik’s Revolution Cube was the height of geek chic!

Designer Andrew Fentem has created the Fentix Cube, which is similar to the ‘80s playtoy we all have languishing in that draw containing rubber bands and marker pens missing their lids. Each side contains a multi-touch interface (iPhone, eat your heart out!), and technology “for gesture sensing a la Wii”. There’s a bunch of different games you can try out on it, but if you’re completely desperate to get your hands on one, head on down to the Kinetica Museum in London.