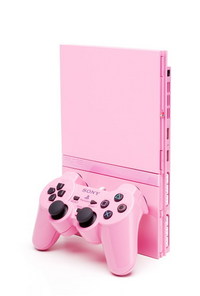 That’s right. Ad agency JWT has been conducting a survey called, er, Denizens of Digitivity (try saying that after a couple of naughty-lemonades), and has found that 44% of female respondents said they own a console, compared to 39% of males.

“The idea of gaming being just for the 18 to 34 male set is now out of date,” says JWT’s Ann Mack. What’s interesting is that the message hasn’t quite got across to the games industry, judging by the huge number of grey, boring military-themed games staring out whenever I flick through a games magazine.

That’s not an argument for more Hello Kitty and pony games, mind (and PLEASE no more pink consoles). But it should show a strong future for games that appeal to both sexes equally, like Animal Crossing, SingStar and all those brain training titles. And, as Keri on PSPSPS points out, there’s plenty of women “kicking ass on Killzone” too.

Related posts
PS3 and Xbox 360 have “near identical” UK sales figures for 2007
PS3 is irrelevant – PS2 will carry on for another three years at least
Rumours of £299 PS3 gather pace, despite Sony’s denial