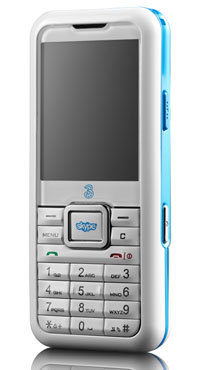 Today’s announcement of the 3 Skypephone wasn’t a huge surprise, given that rumours have been swirling round the blogosphere for a week or so. But now it’s all confirmed: a handset with Skype properly built in, complete with its own dedicated button.

The full story is here, but basically, it lets you make free Skype-to-Skype calls and messages, costs a bargain £49.99 on a pay-as-you-go contract, and includes a two-megapixel camera and music/TV capabilities.

It’s not quite the industry-busting superphone that it could’ve been, mind. You’ll notice that’s just Skype-to-Skype calls that are free: there’s no mention of SkypeIn or SkypeOut, which are the features many experienced Skype users would like to see in a phone (and, not co-incidentally, the ones that all mobile operators would hate to see in a phone).

That said, The Register is reporting that 3 says SkypeIn and SkypeOut WILL be available to 3’s customers in the first half of next year, and that the reason they’ve been left out now is “technical difficulties”. Of course, 3 doesn’t deserve too much ragging on this front – the fact that it’s working with Skype in the first place already makes it braver and more innovative than, well, all the other operators.

The announcement’s impact is also slightly diluted by the fact that Skype has been a part of 3’s X-Series handsets for months now, offering (as far as I can make out) the same features, just not on a Skype-branded phone. The low price is quite big news, since in theory you could pick up one of these phones for 50 quid, and then just use the Skype features for cheap business calls on the go.

It may well appeal more to younger mobile users too, although I wonder if they tend to be more MSN Messenger type people (something that’s already on X-Series, at least for messaging).

I’d like to see how the 3 Skypephone works in practice, too, as in theory Skype should be slicker, thanks to being the phone’s raison d’etre. Getting VoIP working with your address book and messaging inbox sounds like a step in the right direction, especially if Skype’s presence features are tied in nicely.

But my final question doesn’t concern 3 at all, but focused on the other operators here in the UK. Are they going to sign deals with Skype, or indeed any other VoIP providers? What are their strategies for getting to grips with internet calling? Do they have strategies? It’s been a while since 3’s original deal with Skype, and the fact that the next operator to announce a Skype deal is, er, 3, doesn’t indicate much progress elsewhere in the industry.