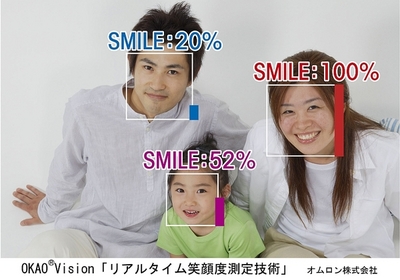 Omron has announced a new technology called ‘Smile Measurement Software’, which uses 3D face-mapping technology to analyse people’s grins and assign them a smile rating between 0% and 100%, even if they’re not looking directly into the camera at the time.

It’s all done within a 46Kb application, which Omron says is small enough to be embedded inside mobile devices. The most obvious application is digital cameras, to ensure a photo is taken when the subjects are smiling.

Isn’t that what the photographer’s eyes are for, though, to judge that sort of thing? Can it cope with wonky mouths or prominent gums? What if you don’t want your subjects to be smiling – can you set a maximum limit (say, 30%) before taking a shot? It’s all a bit puzzling (he says with a 37% sneer on his face while typing).