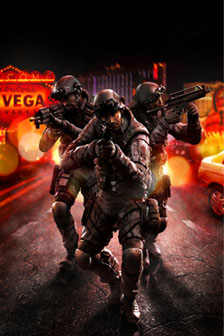 Here’s an ounce of truth, Shiny lovers – I consider myself quite the gamer, but despise RPG shoot ’em up games. Give me fluffy Nintendo games, or Need for Speed anyday, but games that actually endorse violence? Nuh-uh. This is the one instance when you can tell I really am a girlie girl. So yesterday when I had a glimpse at the new Tom Clancy’s Rainbow Six: Vegas game on the Xbox 360, I was more than slightly impressed, and will be throwing aside my Nintendo DS and booting up my console December 1st when it launches! The one feature which really impressed me was that through using the 360’s Live Vision camera, you can take a photo of your ugly mug, and the game uses technology that analyses facial geometry, then intreprets it, transplanting it to the character’s face. It’s not just taking a picture and wrapping it, like other games have done previously, oh no, this baby uses facial mapping, and is the first game to use this tool. Take a look under the jump for my badass character, which looks just like me, only with extra bruising and dirt smudges. I feel so Lara Croft, minus the watermelon-jugs! (Unfortunately…) 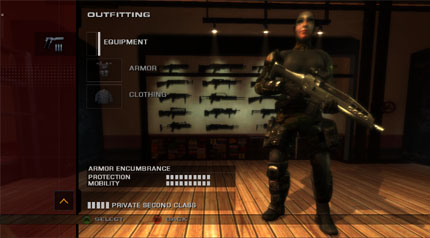