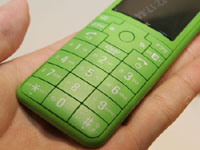 Originally revealed as a concept phone last year, enough people were whipped into a potential-money-spending frenzy by Infobar’s weird patchwork design for the thing to get redesigned and signed up for release.

Inside Infobar 2 they’ve crammed one of the fancy 1-SEG TV tuners they use in Japan for watching TV on mobiles (yes, they actually bother with all that out there), plus that’s a 2″ 400 x 200 screen, it takes MicroSD cards and has a 2megapixel camera. The docking station is a nice little stand for when you’re watching TV, with some particularly odd colour schemes lined up.

Get used to the feel of one now by sticking a Mars bar in your pocket for a few hours. Loads more photos of the thing in action can be found here.