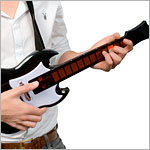 The Power Tour Guitar is a giant leap forward in guitar evolution. It replaces strings with buttons, so you can learn how to play without requiring lessons from some old hippy who was in a marginally famous 70s prog-rock band.

It comes pre-loaded with some of the most annoying amateur guitar favourites, including Smoke on the Water and Wild Thing, which you’ll be belting out in no time thanks to the row of flashing buttons that cue up the chords for you and the simple strumming bar that triggers the note.

It’s clearly more of a novelty toy for amusing Grandma on Christmas morning rather than an emerging threat to the existing string-based guitar business, but if your only guitar skills come from Guitar Hero, it’s at least a bit of a step up.