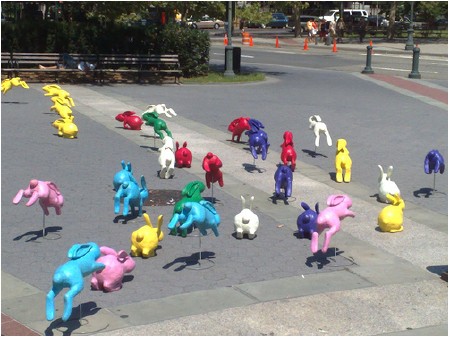 TV Ad Land reports “Play Doh is being staged in New York by Frank Budgen of Gorgeous Enterprises, working with a creative team from Fallon, including creative director Juan Cabral.”

Exactly what these animated bunnies will end up doing isn’t entirely clear yet, but here are a couple of comments on the original post from people who claimed to be there:

I was at the shoot with all the bunnies by the courthouse and the bunny table and the animators with the white gloves.

Someone asked one of the animators how they mark the bunnies at the end of the day, he said “we don’t, we do one shot a day, if we don’t get it, its a rehearsal”

I was a camera assistant on this job… an incredible experience and phoenomenal creative process indeed!

One thought on “Sony's next BRAVIA ad campaign: The play Doh bunnies. Cute!”