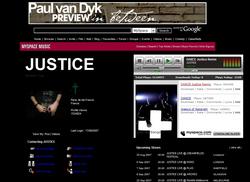 If you’ve used MySpace, you’ll be aware that there are millions of bands hosting music on their profiles, which you can listen to using the embedded MySpace player, but only download if they allow you to.

Well, a new site called MySpaceMP3 appeared last week claiming to allow you to download ANY song from MySpace as an MP3 file (albeit a 96kbps MP3 file without any tags). It could be a serious issue for record labels, an increasing number of whom are letting artists host entire albums on their profiles in the run-up to a new release.

But no sooner had MySpaceMP3 been publicised, than it disappeared. Visit the site now, and you just get an ‘Error 404 – Not Found’ message. Have MySpace’s lawyers forced it offline with a stern writ? Watch this space.