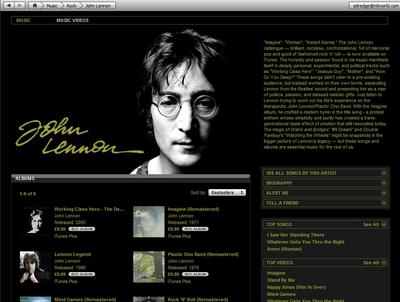 That Yellow Submarine iPod is still stubborn in its refusal to decloak, but Apple has signed another Beatley deal, having launched sixteen of John Lennon’s solo albums, including the first digital releases of his ‘Lennon Legend’ and ‘Acoustic’ compilations.

Meanwhile, there’s also exclusive video content bundled in with ‘John Lennon/Plastic Ono Band’, ‘Sometime in New York City’, ‘Walls and Bridges’, ‘Milk and Honey’, and the compilations ‘Anthology’ and ‘Working Class Hero’. My, there sure are a lot of John Lennon compilations.

The tracks will be available in DRM-free versions, since they’ve been licensed from record label EMI Music. Yoko certainly approves: “John would have loved the fact that his music will now be available in a format suited to a new generation of listeners,” she says. Well, it’s easier to imagine no possessions if you don’t need a stack of physical CDs in the living room.

Related posts
Cracked Pepper – The Beatles’ Sgt Pepper album gets mashed up
Beatles on iTunes? It’s not such a big deal
The Beatles for download – is it or isn’t it?