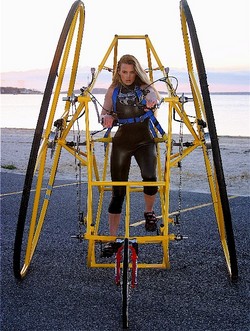 A bicycle that goes at 50mph? Surely bikes are meant to be pushed at 2mph, while eating an ice cream and tipping your hat to passers by? But then I’m old-skool that way.

Curtis DeForest isn’t, so he invented the HyperBike, which is a cross between the Penny Farthing and those big balls that you can strap yourself into to roll down hills (zorbing, I think it’s called).

Basically, you strap yourself into the HyperBike, and can then give taxi drivers a fright by tearing past them at 50mph. You use your arms as well as your legs to power it, and there’s no seat, so you’ll probably end up with buttocks of steel.

Well, it’ll keep you fitter than a Segway anyway, and since you’re strapped in, it’s presumably equally hard to fall out of. If I was going to cycle it on the streets, I’d be wanting to know how it stands up to a crash, mind…

Related posts
Yamaha’s glow in the dark electric iPod motorbike, the EC-02
Chinese kids relearning how to go outside and ride bikes in “internet addict camp”
Get a screen-used Segway from Arrested Development