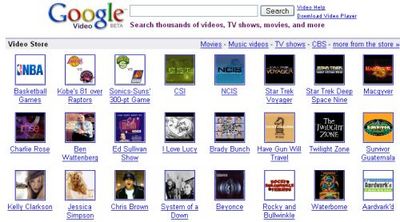 The problem with shutting an underperforming service down is that even though it doesn’t have enough users to justify keeping open, the few users it does have will be mighty fed up with you. Such is the case with the paid-for element of Google Video.

See, Google is canning paid-for video downloads on Google Video in favour of offering free vids with adverts in and around them. But here’s the sting in the tail: anyone who bought videos from the site since its launch won’t be able to play them any more after this Wednesday. “After August 15, 2007, you will no longer be able to view your purchased or rented videos,” says an email to customers.

So hang on. People paid money to own these videos, except now it turns out they can’t play them anymore through no fault of their own? Swizz! Surely Google is rich enough to have found some way of ensuring all its Video Store customers could hang onto their downloads in some playable form, in the interests of keeping customers onside?

And as Ars Technica rightly points out, it provides ready ammunition for those who argue that consumers should have the right to disable copyright protection on digital content without fear of prosecution.

Related posts
Opinion: Has anyone NOT tried to sue Google over YouTube yet? Give it a rest!
Veteran Hollywood director recuts ‘Success’, re-releases on Google Video
Google Video comes to the UK