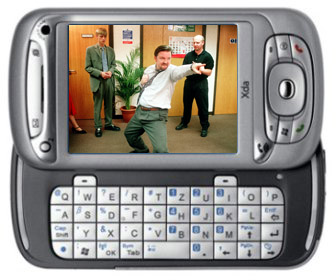 BBC Worldwide has cut a deal with UK mobile operator O2 to put video clips, wallpapers and ringtones of a bunch of top BBC shows on the O2 Active portal. The shows include Doctor Who, Little Britain, The Office, I’m Alan Partridge, and The League Of Gentlemen.

In total, there’ll be over 300 pieces of content made available to O2 customers, although it appears full-length episodes of these shows aren’t on the menu yet. It could be bad news for commuters though: get set for endless ‘yeahbutnobutyeahbutno’ Vicky Pollard ringtones blaring out on the train or bus.

It’s interesting that comedy figures so highly in the deal – four out of the five named shows. I also wonder how these kinds of deals will filter into the production process for future series – for example, getting people to film extra sketches just for mobile.