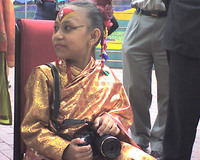 Sajani Shakya was a ten-year old girl, one of the three most-revered Kumari, who are regarded as a living incarnation of divinity by Buddhists and Hindus. Though not permitted to leave Nepal in order to remain pure, Shakya traveled to the US to promote a documentary about Kumari, whereupon her outraged temple elders sacked her. Boing Boing also reports that despite traditions where Kumari live in near-total seclusion, the defrocked goddess has a taste for gadgets, spotted at Silverdocs snapping with her DSLR and shooting with an HD camcorder. [GT]

‘Goddess’ sacked for visiting US