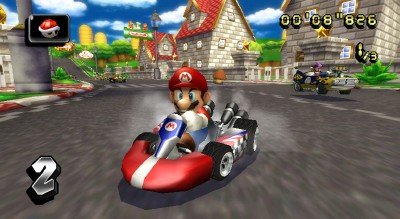 Nintendo took its time bringing God’s Own Racing Game (sorry Gran Turismo fans) to Wii, but at E3 today, the company finally showed off Mario Kart Wii. It’s due out early next year, and will include proper online play – just like the last DS version.

What’s more, the game will ship with a dedicated controller, the Wii Wheel. Well, I say controller – it’s more of a wheel-shaped holder for the Wiimote, which makes you feel more drivey. No news on which characters will be included, or details on tracks etc. I’m wondering if there’s any way to include your Mii avatars in the game.

Obviously, it would’ve been nice to have Mario Kart earlier on in the Wii’s lifecycle, but it’s a clear sign that Nintendo is wheeling out (ho ho) the big guns to ensure Wii’s current buzz lasts beyond 2007, against renewed competition from Xbox 360 and PS3.