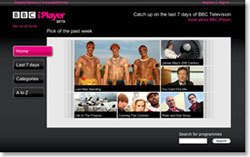 As we mentioned some time back, the BBC has extended its iPlayer Beta trial to the wider public. Although it’s not yet a free-for-all – you have to apply to use it.

The service lets UK users download TV programs up to seven days following their transmission date before they expire after a 30-day window. Other features to be added include ‘series stacking’ to download an entire season after the final episode airs, plus live TV streaming and podcasts.

But it’s not all plain sailing. So far it only operates on Windows XP – due to the Kontiki DRM software that powers it. So bad luck Mac, Linux and indeed Vista users. And the number of public testers allowed in isn’t known – so there’s no guarantee you’ll be allowed in before the official November launch. I’m still waiting to get in – when I do, I’ll let you know more.

Related posts
BBC’s iPlayer launches on 27th July
Is the BBC really porting its iPlayer to iPhone?
BBC iPlayer: yet another “TV highlights over the Net” service launches – how about some nostalgia?