As you know, Susi is swanning around Madison Avenue in New York for the Apple iPhone launch, giving all us Tech Digest-ers larger green eyes than, err, witches have. Or something.

So, just when I was thinking my weekend would consist of avoiding the torrential English weather and cleaning off all the mud on my wellies from last weekend’s Glastonbury Festival – I heard about a hot high-tech ballooning story going down in Canada, so decided to pop over. Yah boo sucks, Susi!

Just last week Stuart told you about the new Toshiba Portégé R500 notebook which would have even Nicole Richie marveling at its thinness, and briefly mentioned that the company are sponsoring a Transatlatlantic balloon race this weekend.

David Hempleman-Adams, holder of 39 world records, is attempting to cross the Atlantic this Sunday night in the smallest gas-powered balloon to ever attempt the flight.

He may not have the millions of girls swooning over him like Bear Grylls has, or be able to start a fire with just his elbow and a leaf like Ray Mears, but there’s no-one in the outdoors scene who would dare attempt the feats Hempleman-Adams has already achieved. Not to mention endure the flight on Air Canada yesterday with the 40-odd group of kids on a school trip, simultaneously breaking into song every so often on the five-hour flight.

The first man to ever reach the Geographic and magnetic North and South Poles, and climb the highest peaks in all seven continents, Hempleman-Adams is no stranger to challenges.

So, tomorrow night, with the weather on our side, I’ll be here in Newfoundland, a small island off the Eastern coast of Canada, watching him depart in a teensy open-air wicker hot-air balloon which isn’t even large enough for him to sit down in and take a kip. Taking approximately four days to reach Europe, if he manages to get even three hours of sleep, it’ll be a miracle. 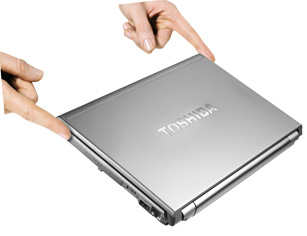 Toshiba is sponsoring Hempleman-Adams’ new trip, and he’ll be using their Portégé R500 notebook during the flight. At just 779g in weight, it’ll be well down his ballast list if he needs to gain height! He’ll have 12.5 hours of battery life to keep in contact with his backup team, check the weather conditions, email his family and cough catch up on Lost torrents. Well, he has to stay busy somehow, non?

Hempleman-Adams has been busy preparing for his departure since we touched down in Newfoundland yesterday, “I will have tracking devices, meteorological data and ATC (Air Traffic Control) frequencies installed to help flight planning to minimise the risks. Weight on this solo flight is critical which makes the Portégé R500 my perfect travelling companion. I’ve been on a seafood diet for six months and I still need some help!”

Over the next couple of days, I’ll be bringing you a video interview with Hempleman-Adams, more info on what kind of technology is behind a balloon race like this, and my own impressions of the Portégé R500.

One thought on “Newfoundland, Canada: what do the Toshiba Portégé R500 notebook and explorer David Hempleman-Adams have in common?”