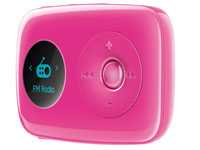 Even though the tiny Zen Stone has only just arrived, Creative’s tireless boffins have decided to up the spec already – adding an OLED screen, doubling the memory to 2GB and including an FM radio and voice recorder. For a tiny, budget MP3 player, the Zen Stone Plus is a huge package.

It also has a clock and a stopwatch, so you can see what the time is and record the amount of time passed since you last looked at the time. Accompanying wristbands and armbands are being launched by Creative too, so you can wear it on your arm if you’re one of those people who likes showing off in such a fashion.

There’s a customisable shortcut button you can stick your favourite feature on for instant, easy access. Music files are dragged and dropped, with Creative promising 9.5 hours of play time – not bad for a tiny, 21 gram MP3 player that only costs £49.99.

And you’ll be pleased to hear it comes in colours other than pink, with black, white, red, blue and green ones washing up on the shelves, along with custom silicon skins if you’re still not happy.