On Monday Virgin Megastores on Oxford Street held a big manga event to celebrate the release of the anime film Naruto. Several Japanese bands performed, dozens of people dressed up in their finest cos-play garb, and supremo voice-actor and all-round anime superstar Dave Wittenberg was on hand to sign autographs. I managed to grab a few sneaky minutes with him to chat about his work on Naruto, released on Monday and exclusive to Virgin, and his previous voice-acting in video-games such as Dead Rising.

Look below the jump for some photos of the winners of the cosplay competition! 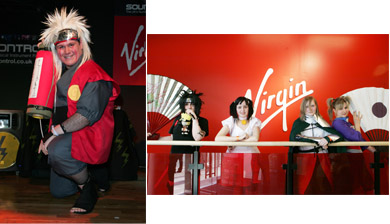