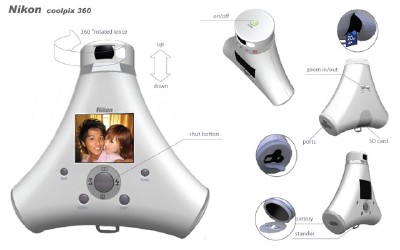 It might look something like this. Designer Ye Chen is responsible for the concept product, which sadly isn’t actually being made by Nikon. Not yet, anyway. He’s billed it as the Coolpix 360, with the big innovation being a rotating head that would allow you to take full 360-degree photos.

No, spinning around while trying to hold your camera steady isn’t an adequate substitute. Even if it is fun. It looks more like a futuristic console joypad than a digital camera, and I wonder how much of a selling point panoramic shots are outside people who hike up and down hills for fun.