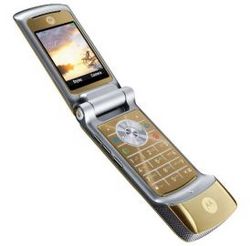 Gold. Always believe in your soul. You’ve got the power to… make phone calls. Okay, so Spandau Ballet probably won’t be rewriting their classics in order to advertise Motorola’s latest mobile resprucing. Although some of them could surely do with the money by now.

But anyway, Motorola has given its MOTOKRZR K1 a golden makeover, releasing a new version of the handset in Champagne Gold. It looks much more bling than the existing black, silver and blue models, anyway. It’s out in Australia now, and hopefully coming to the UK in the near future.