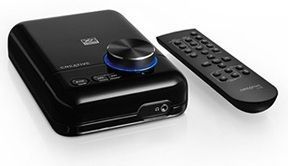 Creative has announced the availability of its Xmod Wireless music system that connects directly to a PC via USB and streams music wirelessly around the home using its Xtreme Fidelity quality-enhancing technology.

The Xmod Wireless connects to a PC and speaker system without the need to install drivers. The included X-Fi Wireless Receiver is then connected to a speaker system elsewhere in the home, up to 100 feet away, and can then be streamed between the two stations.

Their X-Fi Crystalizer and X-Fi CMSS-3D technology enhances music and movies, making MP3’s “sound better than CDs by analysing and identifying which parts of the audio stream have been truncated or damaged during compression”, and then creating virtual surround sound.

The Xmod Wireless comes with a remote control unit. Up to four X-Fi Wireless Receivers can be used on the system.

Available now in the US for $199.99, with additional receivers costing $99.99. UK availability and pricing to be confirmed.