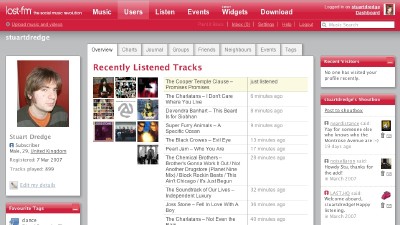 If you can’t beat ’em, buy ’em. That’s increasingly the strategy being adopted by Big Media companies grappling with the implications of Web 2.0. Hot news today is that CBS is about to buy UK-based personalised radio service Last.fm for an impressive $280 million.

The site now has more than 15 million monthly users, who can listen to personalised radio streams, as well as using Last.fm’s software to analyse playlists on their computers to draw up recommendations for other stuff they might like. CBS is reportedly planning to add music sales to Last.fm, and beef up the advertising on its website with sponsored music channels.

Expanding into video content may also be on the cards, which would fit well with CBS’ stable of TV shows. Another implication of the deal is that it could help Last.fm eclipse rivals like Pandora, particularly in the US.

“We see it as a chance to get new eyeballs — or in this case earlobes,” a CBS executive tells the Los Angeles Times, while in an announcement reported to be coming out later today, CBS chief executive Leslie Moonves is quoted as saying that Last.fm’s “demographics also play perfectly to CBS’ goal to attract younger viewers and listeners”.