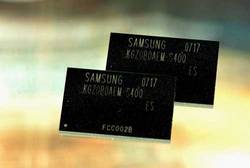 You buy a mobile phone and a day later, you buy some memory. Most mobiles just don’t have the on-board memory – although that could change with Samsung’s introduction of the 4GB multi-chip package (MCP).

This solid-state flash-memory chip aims to cause serious harm to the memory card market, offering small-form internal storage with an adequate capacity for most users. That simplifies things for phone manufacturers – there’s no need to add a memory slot and there’s less electronics needed for phone software to access the memory. Which should mean smaller handsets.

According to Samsung director Jim Elliot: “[It] allows handset manufacturers to significantly reduce development time while deploying an extremely robust design that will result in higher performance for smaller phones, with higher storage capacities.”

The downside is obviously we always want more memory as the years pass. But as we also change our phones as often, maybe it’s not an issue.