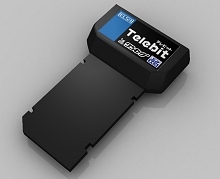 While we have to cart round USB sticks or soap-on-a-rope style contraptions to pick up telly on the move, folks over in Japan need to pack just an SD card.

The Telebit tuner weighs a mere 5g and will set you back 12,800 Yen (around £55), according to the guys over at Digital World Tokyo.

It’s an SDIO device and can receive broadcasts in the digital 1-seg format, popular in Japan.

There’s a telescopic aerial in the box, just in case your reception is patchy, and the bundled software provides EPG, telly shifting and scheduled record functionality.

Don’t hold your breath waiting for it on these shores, though, as it’s only destined for a life in Japan.