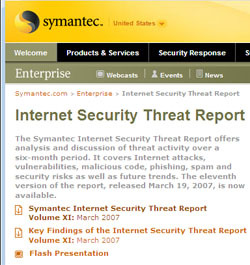 No really – you didn’t read that wrong. Mac bad, Windows good. It’s not news you expect to hear everyday.

Security firm Symnatec’s latest Internet Security Threat Report found that during the second half of 2006, Microsoft’s OS needed fewer sticky plasters than rival systems and it was quicker at patching the holes, according to MacUser.

The report covers 1 July to 31 December 2006 so doesn’t include Vista, which was only launched earlier this year.