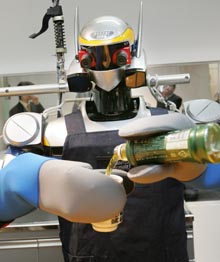 “Imagine if some people treat androids as if the machines were their wives. Others may get addicted to interacting with them just as many Internet users get hooked to the cyberworld,” said Park Hye-Young of the robot team at the Ministry of Commerce, Industry and Energy. Robots are a big part of Korea’s future plans, as the population ages and fewer children are born, necessitating an ethical code to govern robot behaviour. Park indicated that the code will be based on Isaac Asimov’s famous Laws of Robotics, though it was unclear how this (since it stresses robots obeying and not harming humans) will reconcile with, for example, gun-packing sentry bots that have already been prototyped. [GT]