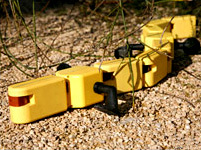 It’s hard to say just how close a resemblance the so-called robo-salamander bears to its reptilian namesake, but its purpose is to provide insight into the workings of evolution. By examining how it swims, slithers and crawls, a Franco-Swiss team hopes to reverse-engineer how its nervous system developed, and how it dates back to simpler creatures such as lampreys. The salamander was of particular interest since in water, it moves like a fish, but performs undulating motions on land which are quite different, showing traits of both its precursors and future incarnations. [GT]