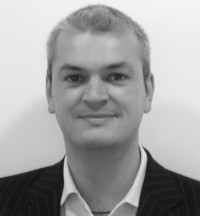 Wi-Fi hotspots are mainly useful for business types, right? Great for catching up with emails over a Latte or seven, while barking out PowerCommands in a series of VoIP calls with your minions. But thanks to the pricing, not that useful to those of us who don’t have a company credit card. That could be changing though.

“You’ve got Nintendo DS and Sony PSP, dual-mode handsets from people like Nokia, and we’re expecting to see personal media players later this year, including Zune and Sony Mylo, as well as more Wi-Fi-enabled digital cameras and even car stereos.”

We saw it in the second half of last year, and very strongly this year. It’s cheap for consumer electronics manufacturers to include Wi-Fi in their new products, so increasingly consumers are finding Wi-Fi in their devices, even if they didn’t buy them specifically for that reason.

Last year, the Wi-Fi device market in Western Europe was 80-90% laptops, but by the middle of 2008, 70% could be consumer electronics devices. It’s a really big swing. What we’re doing is trying to kickstart this Wi-Fi ecosystem by matchmaking the device manufacturers with content and application providers to make the best use of it. 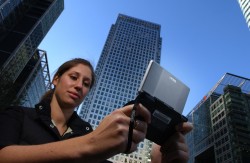 You announced a deal to let PSP owners download Channel 4 audio podcasts from your hotspots last month. Is that the kind of thing you mean?

Yes. We quite narrowly focused down onto the PSP as a device, to see what kind of takeup we’d get, and when and where people would do it. We’ve had about 1,000 people come onto that in a four-week period, which we’re pleased with given the limited direct exposure it got to consumers themselves.

We’ve seen interesting behaviour, and what we were hoping for, which is podcasts being mainly downloaded in the morning, with a huge uptake in locations like stations. People don’t have the time to download something onto their device at home in the mornings – I know I’d rather spend two minutes more in bed! But if they can turn up at the station and download a 30-minute audio programme before getting on a train to work, that works well.

In the next four to eight weeks, we’ll now start to spread that out to other devices. We’re also looking to launch a commercial proposition on PSP, with additional exclusive content being offered across our network.

As in people paying to download content to their Wi-Fi device? Will this mean hotspot pricing models have to change?

Consumers don’t want to buy Wi-Fi. If you look across Europe, the average price is about £6 per hour, which kind of works for business travellers, but is an insane price point for consumers.

At the start of last year we introduced Ultra WiFi, which was a £12-a-month flat-rate subscription. This month we’ll be introducing some new tariffs for consumer electronics devices – all sub-£10, and some around £5 – offering unlimited access. For example, we’re expecting to introduce something for PSP at a low price point.

But that’s only a medium-term solution. In the long-term, customers will pay for the content, and the Wi-Fi access will be wrapped up as part of that value. For example, with a music downloads service you might pay 99p per track, and there won’t be a Wi-Fi fee. We’ll do revenue-share deals to pay for the transport. We’re expecting that business model to grow from the middle to end of this year.

Are broadcasters, record labels and other content providers keen on this sort of thing?

We haven’t come across anyone who’s not keen to be involved. It’s very new, so we’ll definitely launch more trials and experiments before commercialising it. Everybody we talk to is very keen, and wants to make sure they’re doing something. Particularly in the UK, all the broadcasters are having to get pretty innovative very quickly, because their competitors are. 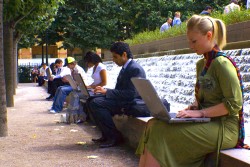 What sort of consumer education is needed to let people know they can use these kinds of public Wi-Fi services, once they launch?

Firstly, the market needs to be told how they can use it. We’re working with a bunch of device manufacturers – Nokia is a good example – to ensure that customers with these devices understand what Wi-Fi brings to them. But Wi-Fi also has to become more useful to the customers, which is down to the kind of networks available.

What we’ve been doing is building indoor Wi-Fi networks in locations like airports, stations, hotels and coffee shops. It’s useful, but you have to know where the hotspots are. The big tipping point, when consumers become more aware, will be outdoor Wi-Fi networks.

We’ve had an intensive programme building them across nine UK cities. Last year we launched in Canary Wharf covering the indoor and outdoor shopping areas, so you can always get a Wi-Fi connection. Soon, we’re going live with a similar thing in the City Of London, with a Wi-Fi network mesh that gives 95-98% coverage with broadband speeds.

For consumers, it means you won’t have to work out where the nearest hotspot is. You’ll be able to take a photo wherever you are and instantly send it, for example, or switch on your PSP or DS and play somebody in an outdoor area without having to find a coffee shop. And of course, with these mesh networks handing you off from Wi-Fi access point to access point, it makes Skype calls much more appealing.

Is mobile VoIP going to be a big driver of public Wi-Fi usage then? There seem to be about 786 startups offering it…

It’s one of the big areas of growth we see this year. Yes, there does seem to be a new mobile VoIP company every five minutes. We see all of them, as we’re a neutral network, so we’ll work with any VoIP provider. Clearly only some can survive, but there’s an interesting dynamic in the market, with fixed-mobile convergance and people like BT launching products like Fusion.

You don’t have to own network infrastructure any more to launch services, and that’s drawing in a lot of leftfield players. In the short term, they’re going to acquire customers. Truphone is doing good things today, and obviously there’s Skype.

One thing we see is that mobile VoIP won’t just be about dual-mode handsets and laptops. A lot of players are putting VoIP functionality in devices you wouldn’t expect it in. We expect to see five or six unusual devices that will make voice calls coming onto the market.

Wi-Fi based music services sound intriguing, and obviously Zune has kicked things off in the States. How soon will we see them here?

I can guarantee that in summer this year, and possibly even in March or April, you’ll see one or more of these kinds of services launch here. We’re aware of a few that are coming onto the market. At the moment, iTunes is seen as the big success for digital music, yet the number of tracks sold per iPod is disappointing.

Again, you don’t want to download and pay for media in the morning. You want to do it on the move, there and then. This year is all about extending that music experience out of the home, and cutting the PC out of the loop. There are so many devices coming onto the market now that don’t need a PC to be in the way, which ties you to a given location and slows the whole process down.

Do media companies see public Wi-Fi networks as a chance to truly sell content, or just a way to push free samples at people – for example a trailer for the programme that’s on Channel 4 tonight?

They definitely see it as an opportunity to sell content, even if the notion of selling full-length movies is still a bit dubious. Broadcasters are looking at content that’s the right sort of length for people sat on a train or bus, so programmes from 10 minutes up to about 45 minutes long is the area they’re punching towards.

I think Wi-Fi and cellular are largely complementary, but that’s quite a big subject in its own right. We have to look at the devices people want to consume media on. Do I want to watch some programming on a 1.5-inch screen? No. Do I want to watch it on a screen the size of a PSP or internet tablet’s? Yes.

So people have an issue right now with the devices that are involved, and also the distribution of those devices are barriers to entry. A large-screen HSDPA phone is four to five hundred quid, yet you can pick up a multi-function Wi-Fi device like the PSP for £150.

Also, with Wi-Fi, when you’re at home it’s free. Broadband penetration is increasing dramatically, with something like 45% of broadband connections having Wi-Fi attached. Consumers are used to it. HSDPA is a big upgrade to 3G, but it’s still not true broadband speeds as you’d expect to get at home.