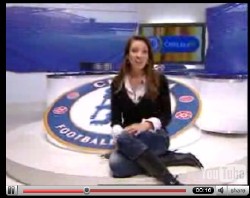 And you thought the only grainy videos of footballers worth viewing involved hotel-room roastings… Chelsea has signed a deal with YouTube to launch its own branded channel on the video-sharing site, with daily news and archive footage.

Techscape isn’t too keen though, pointing out that there’ll be no Premiership goals due to licensing issues, and that the daily news will be of the decidedly ‘official’ variety (i.e. not juicy gossip).

However, we do have a few suggestions for what could go on the channel. Jose Mourinho miming Backstreet Boys songs? It could happen. Check Techscape for the full story.