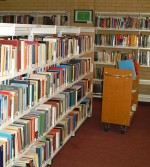 Billionaire Charles Simonyi is due to become the fifth ever space tourist in April, and he’s not short of grandiose plans. For example, he thinks there should be libraries in space.

Simonyi is taking two books on his trip: Von Goethe’s ‘Faust’ and sci-fi writer Robert Heinlein’s ‘The Moon Is A Harsh Mistress’. A prize to anyone who manages to sneak the most frightening boggle-eyed-alien-starring work of sci-fi horror into his baggage before he takes off…