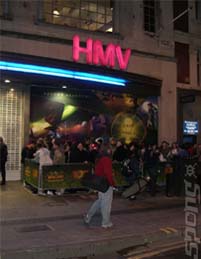 Well done for tearing your eyes away from your latest World of Warcraft battle, long enough to read this post…Oh, it’s about World of Warcraft, funny that, I should have figured! Released at midnight last night in Europe and the US, The Burning Crusade expansion pack features a new continent, two extra races of ‘people’, and the level attainability has risen to 70. HMV at Oxford Street held a launch party similar to that of December’s Wii launch party, with WoW designer Jon LeCraft giving away signed copies, and many geeks fans dressing up in costume. Several hardcore gamers queued for well over 16 hours, in order to gain special in-game gifts, like pets, although most started queuing in the late afternoon. The expansion pack is only £29.99, plus you have to fork out a monthly fee to subscribe to the game as well. Take a gander at some of the photos taken last night – no laughing, however, karma is a bad enemy!

World of Warcraft: The Burning Crusade

One thought on “World of Warcraft: The Burning Crusade launch at HMV Oxford Street, London”