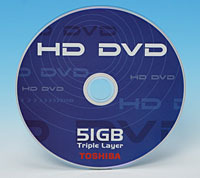 Toshiba has submitted a triple-layer, 51GB HD DVD-ROM disc to the standard’s overseer, with the intention of getting it adopted by the end of the year.

That will exceed the currently superior 50GB storage capacity of Blu-ray. The HD DVD standard currently offers single and dual-layer discs, which are capable of holding 15GB and 30GB of data, respectively. That’s enough for a movie encoded in 1080p HD resolution, along with all the extras.

However, it does currently look weak in comparison to the Blu-ray capacity. Initially, Toshiba aimed to increase capacity for the three-layer disc to 45GB, but an increase in space on each layer has boosted it to 51GB. Good news for HD DVD, bad new for early adopters – the early players will not be able to handle them.