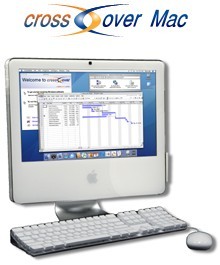 CodeWeavers have announced that their CrossOver Mac software is available, allowing users of Mac OS X to run Windows applications natively without having to buy and install the expensive Windows OS, or fiddle around with dual-booting.

Once loaded, the utility integrates seamlessly within Mac OS X, and users simply load in Windows-based application CDs/DVDs, then launched as any other Mac application would be.

Testing has shown that a large number of apps are compatible, including Office, Visio, Project, Quicken, QuickBooks, and games such as Half Life 2 and Prey.

“The huge number of downloads for the Beta version of CrossOver Mac earlier this year proved the incredible desire among Mac users for a Windows-to-Mac utility,” said Jeremy White, chief executive officer of CodeWeavers. “Our dream at CodeWeavers is to enable everyone to choose a computer system they like, without worrying about compatibility with their Windows programs. Today’s release of CrossOver Mac is a major step towards that goal.”

It sounds good in theory, though like other solutions it will only run on Intel-based Macs. The proof will be in how fast it runs applications, and how reliable it is at faithfully executing Windows software. Hopefully things have moved on some way since the days of Virtual PC and the like. The site claims that “unlike emulation, Wine is a re-implementation of the Win32 API, allowing applications to run as if natively on the target OS. CrossOver is a commercialized version of Wine.” So it sounds promising, with only minor hits on performance. Then again, some apps won’t run at all.

It’s not going to replace a dedicated Windows PC if you’re involved in processor-intensive and/or critical applications, but given the cost (around $60), it could be good for the Mac user than needs access to a handful of PC apps.

The Codeweavers web site features a Compatibility Centre that lists Windows applications that work, and request support for apps not currently supported.