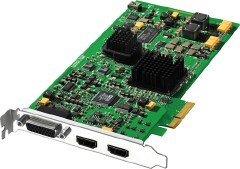 Blackmagic Design have announced the release of their DeckLink HD Studio, a product that they’re claiming is the world’s first post-production grade HDMI and analogue component capture card.

In other words, it will allow your PC or Mac to capture the raw output from both HDMI and analogue camcorders, decks, and set top boxes, as well as being able to playback edited footage on any digital or analogue monitor with HDMI or analogue inputs.

Why would you want both? Well, HDMI is generally becoming the interface of choice for transferring high definition content between components and displays, but it will potentially require that all parts in the chain have the HDCP copy protection built in. That isn’t always practical, or required, and of course there’s plenty of decent equipment that was manufactured before HDMI arrived, so having the capability to work with high-quality analogue signals on the same piece of kit could prove really useful particularly to those doing a lot of post-production video editing and monitoring work.

DeckLink HD Studio features 10-bit capture and playback, high speed 4 lane PCI Express, and 14-bit digital to analog conversion for incredible output quality. It also features the same uncompressed and compressed file formats used by all DeckLink cards, allowing large storage area network based systems to use shared video files for full compatibility. It can work with both 720p and 1080i HD formats as well as standard definition ones.

Happy to sit in any suitably specced PC or Mac, it’s compatible with many popular software titles including Adobe Premiere Pro, Apple Final Cut Pro, Adobe After Effects, Photoshop, and any DirectShow or Quicktime based application.

It retails for $995 in the US, and is available worldwide immediately.