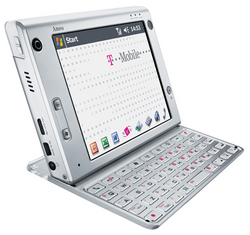 We reported earlier this week that images of HTC’s Ameo had appeared on websites, with speculation that that UMPC-like device would be launched in Europe by T-Mobile. Well, T-Mobile has now confirmed it will be offered in the UK and Germany, as well as offering a full specification.

The Ameo will feature a 5-inch touch-sensitive display, along with an 8GB hard drive, HSDPA 3G connectivity, Wi-Fi, Bluetooth, a three megapixel camera, QWERTY keyboard, and a 624MHz XScale processor. Unlike true UMPCs, Operating system is Windows Mobile (so it’s not a proper UMPC).

The one thing T-Mobile UK was shy about is a price. T-Mobile Germany has quoted a price of 500 Euros if you take out a two-year airtime contract with them, with a release date slated for March. But before you rush out and place an order, word has it that HTC is working on a model with a 7-inch screen, with a launch date planned for the middle of 2007.