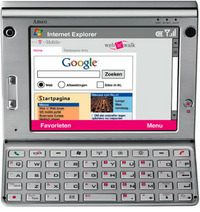 According to reports on Dutch site Pocket Info, T-Mobile is to launch HTC’s Athena UMPC-like device under the name Ameo. Although whether it reaches the UK is still open to question.

The Ameo features a 624MHz Marvell XScale processor, 64-128MB of RAM, 64-128MB of Flash ROM and an 8GB hard drive. There’s also a 5-inch, 640 x 480 display, a fold-out QWERTY keyboard (but will also operate in tablet mode), 3MP still photography and video camera and a front-mounted camera for video calls.

The reports say the device will launch in Germany and the Netherlands. Hopefully we’ll get confirmation of a UK launch in the coming weeks.