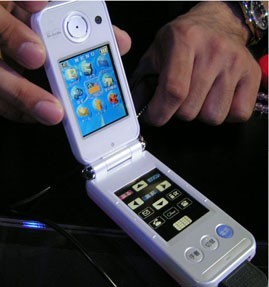 Japan’s DoCoMo has unveiled a clamshell mobile phone featuring two touch-sensitive screens and able to be controlled with either a stylus or finger.

Characters are input by writing on the screen, or a virtual keypad can be called up to dial a number.

DoCoMo said that users would be able to send handwritten notes and pictures to other phones.

The D800iDS, manufactured by Mitsubishi, features similarities with the Nintendo DS game console, though the operator said that the DS stood for “direct and smooth”.

Touch screen phones, smartphones and PDAs weren’t new when Apple announced their iPhone, and you can bet this phone, due on sale in Japan in February, certainly won’t be the last.

One thing the iPhone doesn’t feature is aroma, unlike Sony Ericcson’s SO703i which comes with scented sheets designed to relax users during phone calls.