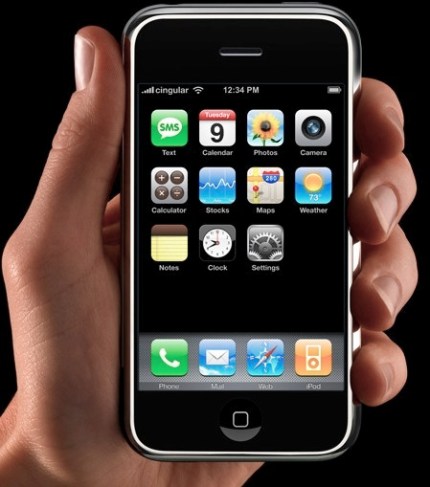 Update: These specs are for the original 2G (EDGE) iPhone. Here’s a comparison with the iPhone 3G.

Get the latest iPhone news or visit our sister blog iPhonic.tv

So, after months (years) of speculation and rumour, Apple has finally announced the iPhone in all its glory.

Tech Digest has already covered the initial communications aspects, and what it might mean for UK consumers if and when it arrives in Britain, plus reactions from the likes of Orange and Nokia (scroll to end of this article for the links) so in this article I’ll take a look at the key features of this ‘revolutionary’ new mobile phone.

First up is that gorgeous touch screen that fills almost the entire front panel. It’s a 3.5 inch (diagonal) screen, boasting a resolution of 320 x 480 at 160 pixels per inch. That’s more than enough for widescreen (16:9) viewing, though you’ll probably get black bars at the top and bottom of the images.

It has just one physical button at the bottom of the display. Nearly everything else is done via the touchscreen, using intuitive finger motions such as tapping, sweeping and ‘pinching’.

It features several sensors. One reorients what’s displayed on screen when the phone is rotated between landscape and portrait orientation. It also has a proximity sensor that knows when you have the phone to your ear and adjusts the screen and touch pad accordingly.

The phone is quad-band, wi-fi enabled (Apple site specs say 802.11b and g though Steve was talking about n compatibility also), with Bluetooth 2.0 EDR, GSM, and EDGE.

It comes with a 2 megapixel camera.

It will run Apple’s own Mac OS X system – no details on whether this will be a cut down version of Tiger, a cut down of Leopard (which could be released before the iPhone is), or a full version intelligently switching to make best use of the iPhone, isn’t clear, but Jobs described and demonstrated the use of Mac OS X applications and widgets, including stock trackers, weather, iChat, iCal, iTunes, iMovies, and iPhoto. It will also utilise Core Graphics, and other features that will be familiar to anyone who uses the desktop version of OS X. 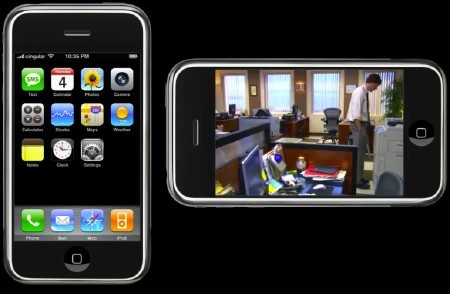 Containing an Intel processor (exact chipset not known), it will offer 5 hours battery life when talking, browsing the web, or watching video, and 16 hours of audio playback. No word on standby time.

There are plenty of calling features, tied into your contacts list and email, including setting up 3-way voice conferences, sending email whilst on a call, and easily adding and calling numbers from emails.

Software wise, it contains a version of Apple Mail, featuring rich HTML email, web browser Safari, with Google and Yahoo searches, Google Maps, and Widgets. Given that the phone OS is Mac OS X, it shouldn’t be difficult to put a variety of other apps onto the system. Apple claim that apps run fast. They also say that PC users will be able to sync their contact data, so presumably as well as supporting the ‘i’ range of Mac apps, there’ll be some syncing with Outlook etc. We’ll wait to see how that bit works.

Apple announced that they’d teamed up and formed close alliances with both Google and Yahoo, which is also exciting.

It will be worth taking a look at the keynote speech (not available at time of writing), and the official iPhone web site to get an idea of the capabilities of the phone.

Suffice to say, it looks very good. It’s been well over 2 years in the making, and it shows. It offers a dynamically new way for users to interact with their phone, using just their fingers. No more add-on or pull-out keyboards, fiddly styli, or other oddities. Of course, the proof will be in the using, and it may not suit everyone (like any interface) but it certainly looks good from a distance.

The groan factor is the wait. Even the US won’t get it until June (Apple don’t have full FCC approval yet, apparently, so things could change a little in specs etc.). Europe isn’t due to get it until sometime in the last quarter of 2007. Great…

Hopefully by then, there’ll either be a souped-up second generation iPhone ready, or a Euro-friendly one. Apple would do well not to ignore the UK which, though a crowded market, is also a very tech-savvy, and promiscuous with their handsets too.

Done right, the iPhone could be massive, though with limited initial stock and global reach, and an initial target of 1% of the mobile market share, it won’t pose any immediate threat to the big guns.